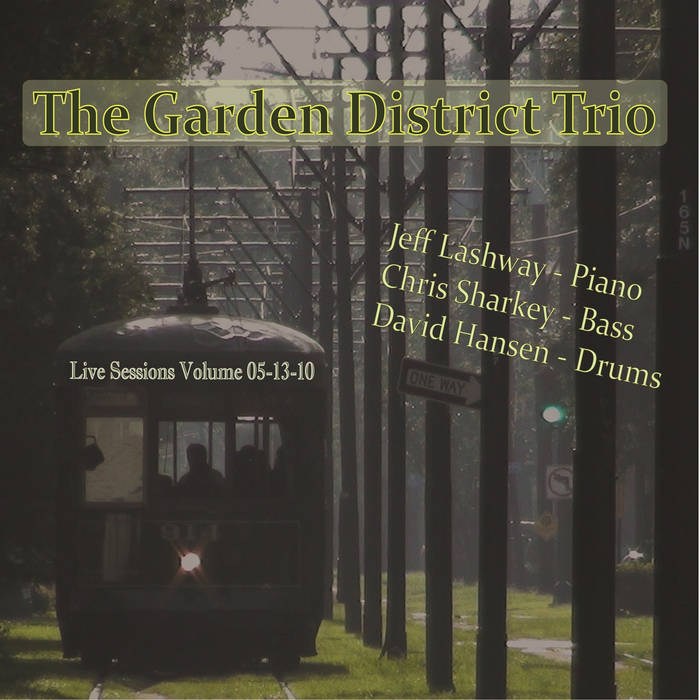 Second Release of our Live Sessions: Jazz and Latin groove infused the Garden District Trio performs from the Classic American Songbook with Swing, Ballads, Bossa Nova, Samba and quasi-rhumba styles with a unique New Orleans feel. The Garden District Trio performs in the style of the incredible, great, swinging piano trios such as Oscar Peterson, Bill Evans, Gene Harris, Bud Powell, Ahmad Jamal, Wynton Kelly, McCoy Tyner and many others.
Second in a series of “Live” recordings at Houston’s Restaurant on St. Charles Avenue in New Orleans where David Hansen’s Garden District Trio has performed nightly since February, 2006. There is a fantastic seven foot Steinway, upright (wood) bass and David’s Yamaha Maple Custom Absolute drums that survived two weeks underwater during Hurricane Katrina. This is the second release of an ongoing group of live, on-site recording sessions. After months of experimenting with various recording techniques, David Hansen finally found a simple six mic set-up using high end condenser microphones (Earthworks live drum mic system on the drums) that is providing an incredible sound. Hansen says: “There are subtle sounds of the working restaurant that are reminiscent of past great live recordings by all our jazz mentors. We are honored to capture the true essence and feel of this trio in a live setting and be able to bring these songs to you.”
We would like to thank the Hillstone Restaurant Group and the Houston’s Restaurant management and staff who are undeniably the best.
The Cover for this project is a Photograph taken by David Hansen of a Street Car along the famous St. Charles Avenue in New Orleans.
Jeff Lashway appears courtesy of Random Act Records. Pianist with the late Maynard Ferguson, originally from Pittsburgh, PA., Jeff has performed all over the U.S, Canada, and Europe. Formal training consisted of 11 years of private, classical piano before branching out into jazz and pop music. Having lived also in Indianapolis and New Orleans, Jeff has incorporated many styles of playing into his own unique style. Jeff played on the album Maynard Ferguson MF Horn 6 (Live at Ronnie Scott's), and on Maynard’s last album, The One and Only, which was completed in July of 2006. In addition, Jeff has played with Slide Hampton, guitarist Joe Negri, and legendary New Orleans cornetist Connie Jones, and was recently a featured artist at the Texas Jazz Festival, performing with the great Latin jazz vocalist, Adela Dalto. Other recording credits include "Swingin' for Shuur" (Diane Shuur) and "Vistas" with Guitarist Royce Campbell, and "Likin It On Top" with trumpeter Bill Carmichaels.
2009 saw the release of Jeff's first recording project as a leader. "Reunion", featuring such luminaries as Vinnie Colaiuta, Jim Rotondi, John Allred, and Todd Coolman, has been extremely well received with worldwide sales and a place in the JazzWeek top 50 chart for several months. A follow-up to "Reunion" is already under way with release scheduled for late 2010.
Jeff also regularly conducts High School and College level Clinics and Master classes. These days, Jeff splits his time between living in Pittsburgh and New Orleans.
Chris Sharkey performing on Bass is originally from Massachusetts. Chris studied at the Berkley School of Music in Boston and travelled/toured on the extensive cruise ship circuit for many years. During a vacation to New Orleans Chris fell in love with the city and has never left. Nearly twenty years later he has become a huge asset to the musical community of New Orleans and is one of the finest upright bassists in the city. He has recorded, toured and performed with many of New Orleans finest musicians.
David Hansen, born and raised in Abbotsford, British Columbia, Canada and has called New Orleans home since 1991. A New Orleans drummer and entrepreneur who has performed worldwide, maintains a heavy performance schedule in New Orleans and operates a music booking agency for Louisiana artists. David has travelled, toured and performed with Jimmy LaRocca's Original Dixieland Jazz Band®, Tim Laughlin, his own Garden District Band and the New Orleans Spice® - Brass and Jazz Band. David is honored to have received an Associate Diploma in Music (1984) from Malaspina College (now Vancouver Island University) located in Nanaimo, British Columbia, Canada; and a Bachelor of Music (BM) in Jazz Studies Performance – Percussion Emphasis (1990) from the University of North Texas (formerly NTSU) located in Denton, Tx. Mr. Hansen has been a drum instructor since 1979, a band leader, manager, agent and business entrepreneur since 1994 and an entertainment director for various New Orleans companies since 2004. David has recorded on more than twenty Albums (CDs) with Jimmy LaRocca’s Original Dixieland Jazz Band, Children’s entertainer Johnette Downing, Cynthia Owens, many others and his own projects including this digital download album.
ENJOY and thank you!