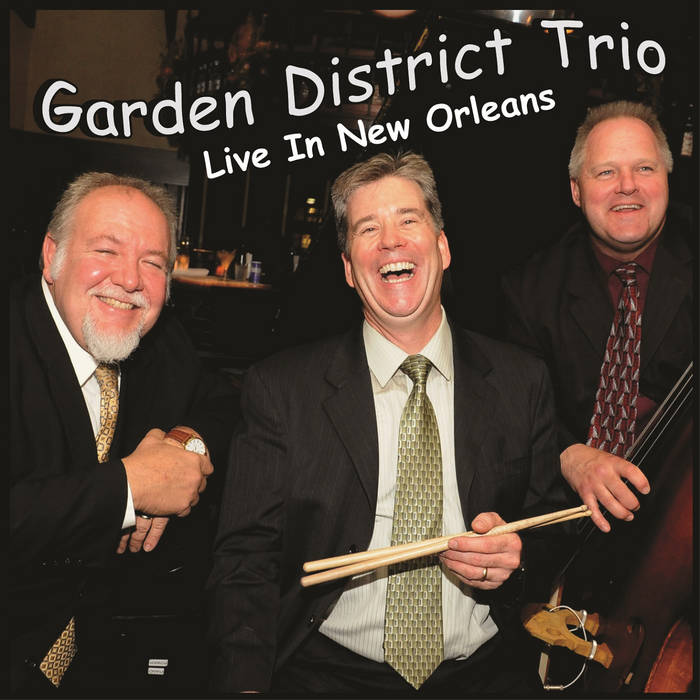 Short Album Description:
Jazz and Latin groove infused performing from the Classic American Songbook repertoire with swing, ballad, bossa nova, samba and quasi-rhumba styles with a unique New Orleans feel.
Album Notes:
Recorded “Live” at Snug Harbor. “Snug” as we musicians call it, is a Jazz Bistro on Frenchman Street in the Faubourg Mariginy area of New Orleans. This is an intimate and very famous jazz venue showcasing national performers and is also home to the best, most talented jazz artists in New Orleans who rotate through a schedule of dates. We performed on a hot Tuesday night in the middle of July with just a handful of friends and guests. They ventured out to enjoy what turned out to be an incredible and musically passionate evening. Guests from New York, Russia, Israel, Boston, and of course, New Orleans were present. A few subtle nuances from the live sounds are present throughout the recording – they bring back instant memories of the moment to us and we hope they will create curiosity and excitement as you listen.
Jazz and Latin groove infused the Garden District Trio performs from the Classic American Songbook repertoire with swing, ballad, bossa nova, samba and quasi-rhumba styles with a unique New Orleans feel. The Garden District Trio performs in the style of the incredible, great, swinging piano trios such as; Oscar Peterson, Bill Evans, Wynton Kelly, Gene Harris, Bud Powell, Ahmad Jamal, McCoy Tyner, Ray Brown, Vernel Fournier, Ed Thigpen, Modern Jazz Quartet and many others.
The Cover for this project is a current photo of the band taken in 2011 by one of New Orleans finest photographers, Cheryl Gerber.
Tom Hook performing on piano is an outstanding musician and songwriter who began his career in Kansas City Missouri. Early in his career, he was a founding member of the New Red Onion Jazz Babies and then later the Black Dog Jazz Band, an association that has led him to appearances at most major Traditional Jazz festivals in the US, multiple tours of Western Europe and a tour of China. Tom has many lengthy associations with outstanding organizations that include the Delta Queen Steamboat Company on the Mississippi, Delta and American Queen vessels, Walt Disney World, a Las Vegas Casino, Universal Studios City Walk; where he was presented with the “golden Woody” award for his premier entertainment, Harrah’s Casino in New Orleans, the Majestic America Line’s entire fleet of nine vessels, Windstar Cruises and his own Daymark Productions. Tom has proven himself as a performer, bandleader, and musical director, manager of entertainment, director of entertainment, show writer, producer, arranger and all around multi-talented professional. He has performed in Kuala Lumpur, Malaysia with Hansen’s Garden District Band, toured Japan multiple times performing with Tom Fischer’s New Orleans Jazz All-stars. Tom has also appeared on the Traditional Jazz Festival circuit performing in Victoria, BC, Mammoth Lakes, CA, Penticton, BC, and Sun Valley, ID. He has performed on an Alaskan cruise and in the Aegean Sea, cruising between Athens and Istanbul. When not on traveling, Tom performs nightly with David Hansen’s Garden District Trio (The band on this recording) in New Orleans at Houston’s Restaurant on St. Charles Avenue. He is also a regular performer at Dos Jefes Uptown Cigar Bar, Fritzel’s European Jazz Pub on Bourbon Street, as well as every major performance venue and festival in New Orleans.
Chris Sharkey performing on Bass is originally from Massachusetts. Chris studied at the Berkley School of Music in Boston and travelled/toured on the extensive cruise ship circuit for many years. During a vacation to New Orleans Chris fell in love with the city and has never left. Nearly twenty years later he has become a huge asset to the musical community of New Orleans and is one of the finest upright bassists in the city. He has recorded, toured and performed with many of New Orleans finest musicians.
David Hansen performing on drums is a percussionist and entrepreneur who has performed worldwide, maintains a heavy performance schedule in New Orleans and operates a music booking agency for Louisiana artists. David has travelled, toured and performed with Jimmy LaRocca's Original Dixieland Jazz Band®, Tim Laughlin, his own Garden District Band and Jazz Orchestra, the New Orleans Spice® Brass and Jazz Band, a cameo appearance with the Onward Brass Band and as a guest artist performing with an all-star band many times in Italy. In 2007 David was proclaimed a "Music Scholar" for the Smithsonian traveling exhibit "New Harmonies: Celebrating America's Roots Music" sponsored by the Louisiana Endowment for the Humanities. With his full Garden District Jazz Orchestra, David offers a New Orleans Jazz History Show that is very popular. David was born and raised in Abbotsford, British Columbia, Canada and has called New Orleans home since 1991. He has migrated from British Columbia to Louisiana, studied the history of jazz and performs with a band dating back to 1916 and the first jazz recordings. David’s love and passion for the history of jazz has led to a deep understanding of diverse musical styles, cultures and led him to embrace and respect all aspects of the music he loves. He had the honor to attend the following schools and has an Associate Diploma in Music (1984) from Malaspina College (now Vancouver Island University), Nanaimo, British Columbia, Canada; and a Bachelor of Music (BM) in Jazz Studies Performance – Percussion Emphasis (1990) from the University of North Texas (formerly NTSU), Denton, Tx. Mr. Hansen has been a drum instructor since 1979, a band leader, manager, agent and business entrepreneur since 1994 and an entertainment director for various New Orleans companies since 2004. David has recorded on more than twenty Albums (CDs) with Jimmy LaRocca’s Original Dixieland Jazz Band, Children’s entertainer Johnette Downing, Cynthia Owens, many others, and his own projects including this album.
Now, enjoy the music!